In 1934, after being a nurse to Hack Smith for four years and an unexpected heart attack that took his life, Mary Joyce was deeded the Taku Glacier Lodge. With the camp, she also inherited 15 sled dogs and three head of cattle[1]. Turning the private lodge into a tourist resort that could accommode up to 30 guests, business thrived. In 1935 she was invited to the 1936 March Fairbanks Ice Carnival.

This began another adventure of her lifetime- a 1,000 mile dog sled journey from her home straight to Fairbanks. She chose her 5 best dogs, including her guide dog named Chocak Lagoose. Leaving in December with plenty of time, she joined a native group to Atlin and had guides continue with her through the White Pass to Whitehorse. Hurdled by illness and blizzard conditions in parts of remote wild Alaska, she never gave up through temperatures as low as -60°F with no shelter, until she reached the Tanana Crossing. At this time, she learned of the media buzz locally and nationally following her story. She also realized that she would not arrive on time to the Carnival if she continued with her dog team. Mary Joyce made the difficult decision to finish the last 250 miles by plane, promising to return immediately after the Carnival for the dogs to officially complete the mush to Fairbanks.

Upon arriving to the Carnival, Mary Joyce declined the invitation of competing in the Miss Alaska beauty contest in favor of an honorary membership into the Pioneers of Alaska[2]. This organization’s goal was to preserve early Alaskan history and was formed in 1907. She later continued with her promise and returned for her dog team to complete the mush, arriving into Fairbanks on March 26, 1936. Joyce journaled throughout this expedition, allowing us to understand so much of her extraordinary journey. “I just wanted to see if I could do it,” she’d said to journalists upon completing the adventurous and daring mush[3].

Among this accomplishment, she also became one of Alaska’s first female bush pilots, an airline stewardess, nurse, entrepreneur, and political candidate. You can learn more about our heroine and claim to fame in “TAKU: Four Amazing Individuals- Four Incredible Life Stories and the Alaskan Wilderness Lodge That Brought Them Together”, by Karen Bell and Janet Shelfer available on our online store. 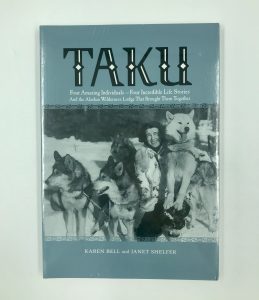