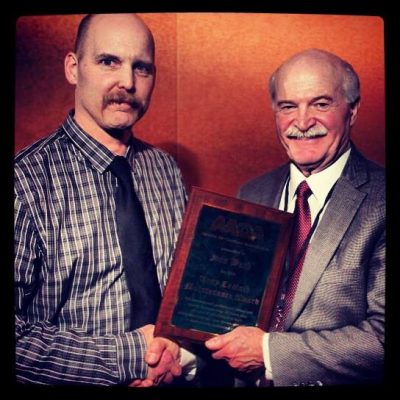 Five years ago, Don Bach, Director of Maintenance for Wings Airways, received “The Tony Cestnik Maintenance Award” from the Alaska Air Carriers Association. Mr. Bach continues to lead with the highest standards in aviation safety. Please read below from the original 2014 Press Release to learn more!

Don Bach, Director of Maintenance for Wings Airways will be honored at the Alaska Air Carriers Association Convention on February 19th at the Hotel Captain Cook in Anchorage. Joy Journeay, Executive Director of the Air Carrier Association said, “The Tony Cestnik Maintenance Award exists to honor an individual, team, or organization for distinguished, longstanding performance of aviation maintenance, which sets a standard of excellence. The Association salutes Don’s decades of commitment to high safety standards and his unwavering commitment to exceptionally maintained aircraft.”

Lifelong Juneau resident, Don Bach, entered into what has become an outstanding aviation maintenance career at the Juneau Airport. Starting with Ernies Aircraft, moving on to Ron Maas at Taku Glacier Air in 1985, Bach joined the Wings’ companies in 1986. Don credits his mentor Mike Fenster during those early years in learning how to patiently and methodically perform his duties and the oversight of Wings’ maintenance program. Assuming the leadership role in 1990, it has been Don’s responsibility to provide oversight for up to 20 aircraft of various makes and models.

Previous owner and founder of Wings of Alaska, Bob Jacobsen praises Don’s commitment and skill, “It has been fortunate for us and for our customers that Don learned from one of the best, Mike Fenster, and has continued to improve upon his skills for 30 years. I am proud to associate myself with Don as a friend and business partner.” In 2002 Don purchased shares in Wings Airways, with other long time Wings’ employees, investing in the floatplane side of the business, operating today from the downtown Juneau waterfront, bringing Don’s career full circle.

For over 26 years Mike Stedman, now co-owner of Alaska Seaplanes, worked along side Don at Wings as Director of Operations and shareholder. “As past President of AACA I am especially proud to see Don recognized for his outstanding integrity and ability to maintain aircraft to some of the highest standards in the Alaska aviation industry.”

Company President Holly Johnson, shared her pride in working alongside Don, “Safety is Don’s number one concern. His professionalism and the quality of his work is well known across the aviation community, as well as his vast knowledge of DeHavilland aircraft. Don has been a leader on our team, cherishing the history of our fleet, insuring their safe operation, and sharing his energy and expertise as he works. We are proud and fortunate to have Don on our team.”

“By acknowledging the exceptional merit of an individual or organization, the Alaska Air Carrier Association service awards encourage performance at the highest standards, continually developing professionalism in the Alaskan aviation industry,” says Joy Journeay, the AACA executive director. “We are proud of Don’s skillful devotion to protecting aircraft as they carry Alaska’s citizens and visitors across the most beautiful landscape in the world.”