Discover the rich past of this historic lodge which was built in 1923 amid the untouched Tongass National Forest. 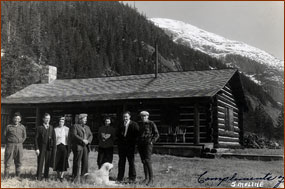 Taku Lodge was originally built by Dr. Harry C. DeVighne in 1923. He opened it up as one of Alaskas first Hunting and fishing Lodges available for overnight guests. The lodge was used as a base camp as they conducted their excursions all around the valleys and streams of the Taku River.

In the fall of 1930, Mrs. Erie L. Smith visited Taku Lodge while touring Southeast Alaska on her yacht, the “Stella Maris”. Mrs. Smith bought Twin Glacier Camp as a second home for both summer and winter use. Her son, Hack, stayed on at Taku Lodge year-round as a caretaker. In the summer Hack kept a crew of men busy constructing new buildings and maintaining the camp. Also helping out with year round caretaking was Mary Joyce. Mary was originally hired on as a private nurse for Ms. Smith and Hack, but quickly fell in love with the lodge and stayed on to help out with the year round maintinance and upkeep of Taku Lodge.

Mary and Hack had began raising sled dogs during their years at the lodge, putting them to work in the winter hauling firewood and using them for travel on the frozen Taku River. It did not take long for word to spread about these Taku River huskies. What started as a hobbie for Hack and Mary quickly became a business as they began to sell well trained sled dogs all around the state of Alaska and Western Canada.

In 1934, Hack set out on a hunting trip on the Stikine River. While in Wrangell, he suffered a heart attack and died. Mrs. Smith was very distraught at the loss of her son, and decided she did not want anything more to do with Taku Lodge. Mary had always expressed a passion for the  Taku River, and Mrs. Smith did not have the heart to take that away from her. Mrs. Smith was happy to give Taku Lodge to Mary Joyce.

Mary Joyce was an adventurous girl. When she received an invitation to participate in the 1936 Fairbanks Ice Carnival, she decided to make the trip overland by dog sled. She set out from the lodge in December of 1935 with five dogs and a loaded sled to travel the1,000 miles to Fairbanks. Mary spent three months on the trail of which she was only  actually able to travel fifty-two days. She averaged twenty-miles a day in spite of temperatures to fifty degrees below zero and only a few hours of daylight each day. The sled and harness she used on the trip are on display at the Taku Lodge.

After her journey Mary opened Taku Lodge and operated it successfully as a tourist resort, calling it Twin Glacier Lodge. She owned Taku Lodge until 1942 when she sold it to Mr. and Mrs. Royal O’Reilly. In Juneau, Mary opened two bars on South Franklin Street and lived above the “Lucky Lady” until her death in 1976. 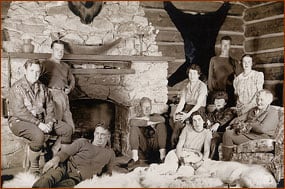 The Taku Lodge officially became Taku Glacier Lodge in 1949. There have been several owners and many colorful stories since. In 1971, Taku Lodge was purchased by Ron and Kathy Mass of Juneau. After several hard working years of restoring the lodge the Maas’s decided to share their love of the Taku Glacier Lodge with visitors of Southeast Alaska by offering the Wilderness Salmon Bake & Scenic Flight in 1979.

In 1993, the Maas family decided to retire and sold Taku Lodge to a Juneau couple, Ken and Michelle Ward. Ken was raised in Ketchikan, and moved to Juneau in 1967, where he later owned and operated an air taxi business, Juneau’s Ward Air. Michelle was born in Seattle and raised at the Usibelli Coal Mine in Healy, Alaska. She has worked for Alaska Airlines since 1973. Ken and Michelle were married in 1985, and they have five children who have grown up spending summers at the Taku Lodge. 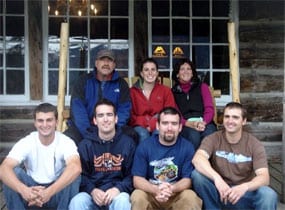 Over the years, many people have called Taku Lodge home. Each summer a crew of nine employees occupy the small cabins surrounding Taku Lodge. Taku Glacier Lodge is their home away from home as they welcome guests each day of the summer season.

It is because of the wide variety of people involved with Taku Lodge, the many visitors, and the overall love for this magical place that the history of the Taku Lodge is still alive today.

Wings Airways is honored to offer our Taku Glacier Flight & Feast Tour and we hope you will join us on this once in a lifetime experience!